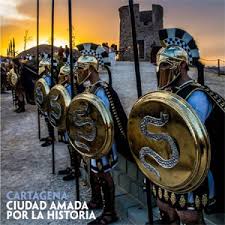 Cartagena lives within history, but history is also alive in the city, so intensely that his people played a leading role in the events which took place in this region more than 2200 years ago, turning them into a unique festival in Spain.
This festival is based on the second Punic War and on characters such as Hannibal and his winning rival, Cornelius Scipio. Celebrations begin with the foundation of Qart-Hadast by Asdrubal in 223 B.C. and end with the Roman victory in 209 B.C. For ten days, all the heroic deeds which took place during the years of the Carthaginian rule, as well as the defeat and invasion by the Roman Empire, are performed and lived in an unparalleled atmosphere by natives and foreigners alike. Troops and legions represent the scenes of events based on the city¿s history and perform grand parades in which the costumes and armaments one would only expect to find in film productions are there on the streets. In the second fortnight of September, Cartagena and its people get inside history and revive it for ten magnificent days in which the heroic deeds of Carthage and Rome are remembered. The scenes are usually staged at the very place in which the event took place in ancient times.
In a huge setting, the 50 groups which embody Carthaginians and Romans decorate the camp and put up bars open to all the visitors. In this way, the camp becomes a big city set in ancient times where the art and symbols of Rome and Carthage, Greece, Iberia and Phoenicia are found all around. Joy, hustle and entertainment are the stars of these nights where one can eat and drink with Scipio himself, share a wedding cake with Hannibal, witness the kidnap of a beautiful damsel or the invasion of enemy tents by Carthaginian and Roman warriors. The Carthaginians and Romans Festival typifies the way of thinking and acting of a city which has managed to blend present and past to playfully live what it was.